London's Burning - in the most Unusual way

The 350th anniversary of the Great Fire of London was commemorated in spectacular style last month, as Artichoke's London's Burning festival transformed the capital with a week of extraordinary art events, and brought Unusual Rigging on board to handle aspects of the technical production.

The festival invited audiences to rediscover the City of London and beyond, past and future, through a series of art installations and performances. Jim Dugan, who headed the event management team at Unusual Rigging said: “This unique event offered an opportunity to understand just how much of an impact the Fire had on the architecture, outlook and infrastructure of the City, including some of its most iconic buildings and landmarks, and we worked with Artichoke to demonstrate this through their very unique perspective."

He continued: "Unusual was brought on board just eight weeks before the install. In this time we had to not just figure out how the various artworks would be installed, but more importantly we had to organise for road closures and secure permission from more than 60 building owners who would be affected by the sheer scale of the event."

One of the first installations that Jim organised was a piece at Broadgate, where audiences watched as individual actors performed in a tank that regularly filled with 3,600 US gallons of water (15,000 litres). The piece entitled HOLOSCENES reminded viewers that today, it is flooding rather than fire that is the contemporary threat to our cities. "This was somewhat nerve-wracking," commented Jim. "We worked closely with both the artists and Broadgate Estates who own Exchange Square to organise every single logistic - from how to get the tank into place, various technical and timing challenges and importantly weight loading challenges as we were working directly over the tracks of Liverpool Street Station.

At Inner Temple, more than 3000 people visited OF ALL OF THE PEOPLE IN ALL THE WORLD by Stan's Cafe. The installation which used two tonnes of rice to visualise statistics, compared historical facts with contemporary moments. Thousands more enjoyed the after-dark FIRE GARDEN by Compagnie Carabosse on the riverside in front of Tate Modern each night. Jim continued: "This installation involved bringing a number of steel structures made by the artists down to the Tate Modern, and setting it all on fire. We only knew this install was happening outside the Tate Modern two weeks before the event, which could have proved difficult had the people at the Tate Modern not been so extremely helpful and an absolute pleasure to work with."

Martin Firrell's  FIRES OF LONDON, saw two new commissions on either side of the River Thames; Fires Ancient  lit the dome of St Paul's Cathedral, while Fires Modern projected onto the fly-tower of the National Theatre, revealing stories of resurgence and change that have shaped the UK's capital city.

The final and perhaps the biggest piece of the entire event to challenge the Unusual team was an artwork by Stationhouse Opera and Artsadmin entitled DOMINOES. Thousands of spectators watched as a domino run made out of lightweight breeze blocks stretched through the City of London - starting at Monument and ending at the Leadenhall building, Barbican St Giles and Paternoster Square. "This was truly immense," commented Jim.

Twenty-three thousand breezeblocks, over 50 stage managers and production managers and 350 volunteers helped to set up and manage the event. At each end site, a structure 6.5 metres tall was set alight and then collapsed under its own weight. The end structures were built on the Thursday, with the main event taking place on the afternoon of the Saturday. As such, the majority of the route wasn't installed until the afternoon of the event itself. Planning was vital -  "Everything was drawn and agreed, all the road closures secured and all the building owners granted permission - after all we were essentially shutting down the entire central part of the city," explained Jim.  "Road closures were in place from 1pm and back up and running by 8pm - no mean feat but we did it thanks to a 'all hands on deck' approach."

He added: "We brought in a team of production people to handle this event, and a great deal of the credit for making sure it ran so smoothly goes to Denise Millar, Unusual's operations administrator, who organised all the freelancers, all the orders, the hotels, and dealt with all the background work that, while essential, nobody ever really thinks about."

Helen Marriage, director of Artichoke said: "We really wanted to do something completely different to mark this historic event. Each piece of the London's Burning programme added a different dimension. Our aim at Artichoke is to create extraordinary moments that disrupt the everyday and reach the widest possible audience. With the help of Jim and the Unusual team, we are very proud to have done exactly this. HOLOSCENES for example took some critical planning, and the work undertaken by Unusual to ensure DOMINOES ran smoothly was painstaking. It was an absolute pleasure to have worked alongside Unusual Rigging once again. They are our go-to for all of our strange and unusual events, and they never fail to help us make the seemingly impossible happen." 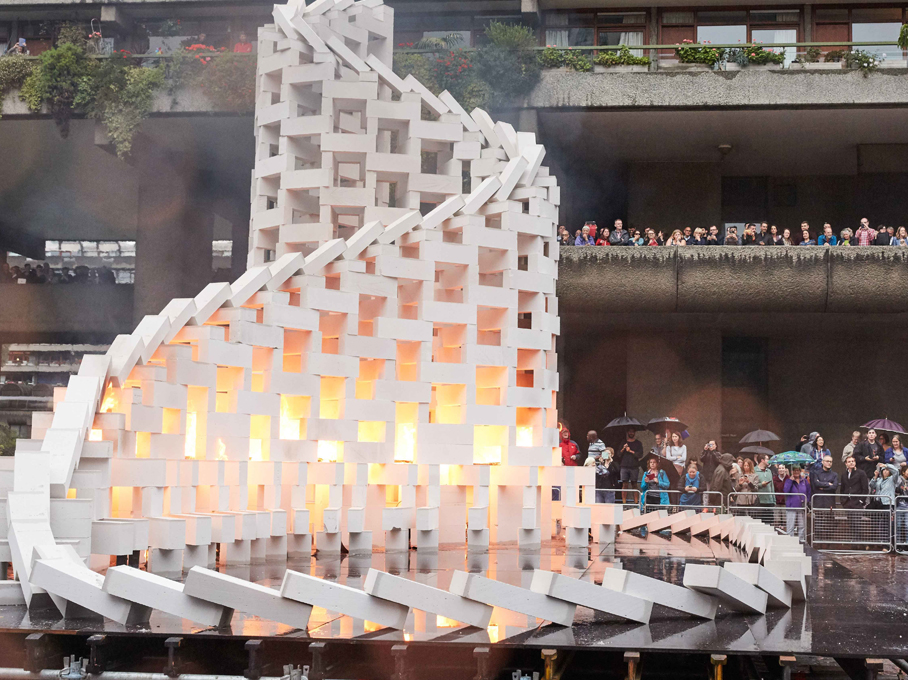 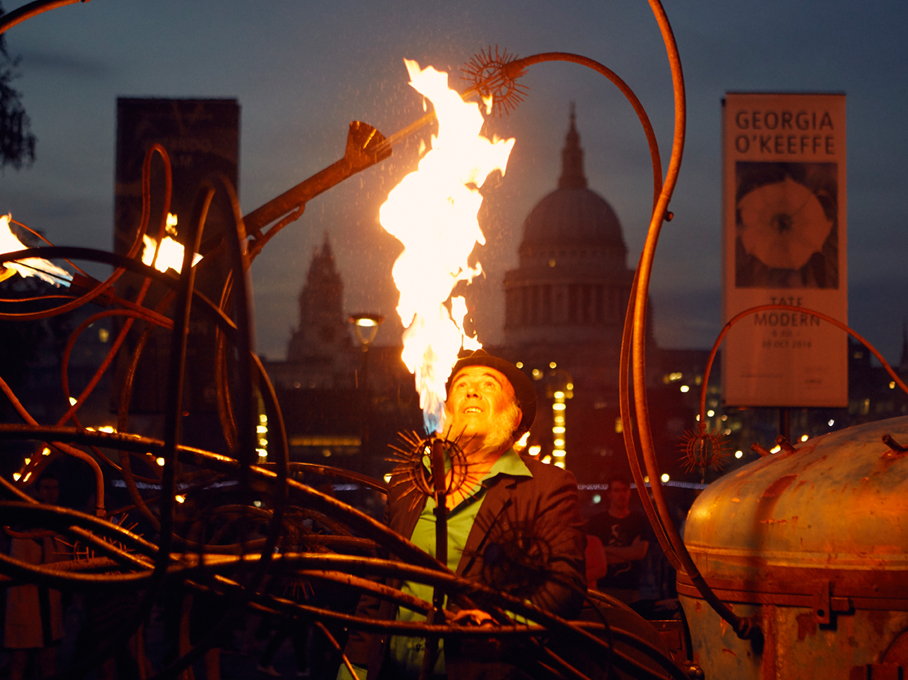 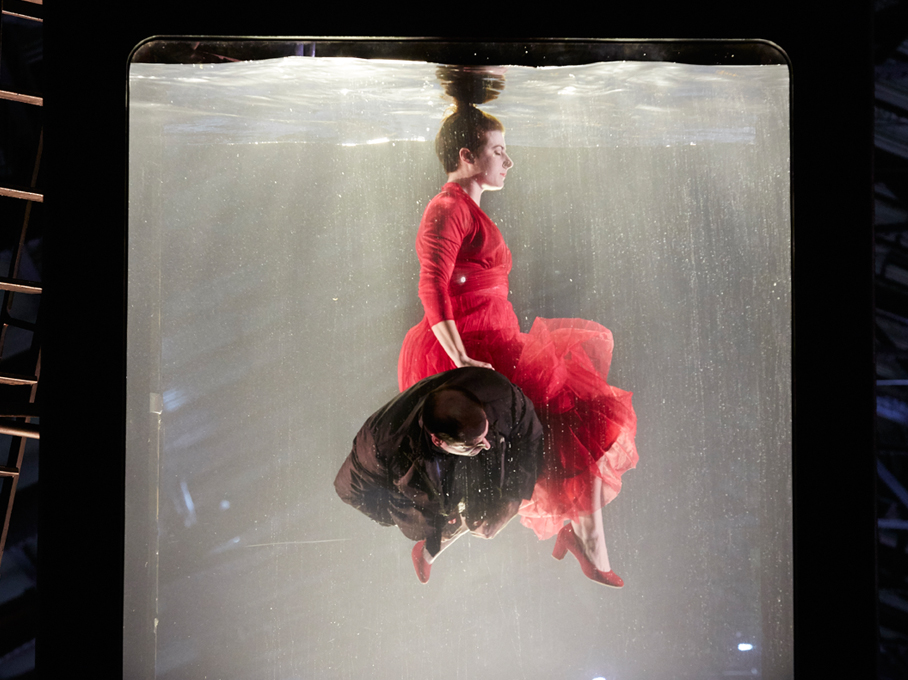