Unusual Rigging: A shining star in the Arabian sky

Noor Riyadh is a new, citywide annual festival of light and art that showcases individual artists and talent and promotes creativity. The event produced by Balich Worldwide Shows (BWS) brings together artists from all over the world. Star in Motion by renowned lighting designer Koert Vermeulen, is a powerful focal point in the middle of the city of Riyadh – a shining star, suspended from the top of the famous Kingdom Tower more than 300m in the air. Balich Worldwide Shows has worked with Unusual Rigging on other events in the past, and as such they were the natural choice when it came to rigging this spectacular installation.

Steve Porter, director at Unusual explained: “Having worked with BWS on several projects in the past, when they approached us to hang the centrepiece for the festival, it was a pleasure to collaborate with them again. We were approached by Ollie Green, BWS technical director, to hang a lighting feature or star in the space at the top of the building. We loved the idea but never really thought permissions would be granted so we were thrilled when BWS overcame many difficult hurdles to secure this.”

Unusual’s design team and production rigging department worked in conjunction with Ollie green and BWS’s independent structural engineer Rasti Bartek from Cundall. “We had to work quickly and efficiently in the design and fabrication process of all the heavy-duty bracketry and Dyneema which was supplied by Marlow Ropes. Load cells were also an issue due to short notice in order to make the freight shipment dates and taking into account customs delays due to Brexit, but we eventually sourced a system from JCM Load monitoring,” said Steve.

The covid 19 pandemic added an extra layer of complication to planning the event too. Initially, there was some uncertainty over whether the show would even be able to go ahead. Fortunately, however, it was given the green light, but this did mean that the pre-production schedule for the job was tight. Due to lockdown restrictions, the Unusual team was unable to carry out a site visit prior to the installations. Adam Sutton, rigging project manager at Unusual said: “For a job of this scale, this was rather daunting, and we had to rely on pictures and drawings of the venue. The unpredictable nature of covid meant that complications regularly arose, such as members of the crew having to self-isolate the day before they were due to fly out. Thankfully, with contingency planning down to a fine art form, we managed to stay on schedule.”

Once out in Riyadh and work on the project began, the team began work installing the star. Weighing in at 5.5 tons, it was temporarily lifted on 6 off 2 ton Liftket electric chain hoists. It was then transferred onto its permanent suspension points – 4 off – Dyneema Rope (80mm in diameter). These ropes have a break strength of 490 ton each. The cables needed to be this large due to the wind load on the star and the wind tunnel effect of the building. “We then had to tension the star down to stop it swaying in the wind,” explained Adam. This was done on an additional 2 off – Dyneema Rope (80mm in diameter) connected to 2 off – 16:1 Tirfor assemblies, giving us a total of 50ton in tension to stop the star from swaying in the wind.”

At Unusual Rigging, Health and Safety is always the first consideration on any project and this one was no exception. “Even before thinking about having to work at 300m and the complications that comes with that, we first needed to consider how to transport equipment weighting several tons up two flights of stairs. One case alone contained two ‘I’ beams that weighed in at a sizeable 750kg each. This was one of the biggest concerns – not having had the opportunity to carry out a site visit, it was a challenge to produce the safest method of work before arriving on site.” He continued: “Once we had managed to get all our equipment to the work area, we then started building a working platform to ensure that all crew had a safe stable place from which to work. For the health and safety of both the crew and the members of the public below, the platform was constructed with a double height handrail and debris netting. As the star was build the weather and the wind speeds were constantly monitored and appropriate action taken if needed.”

Star in Motion, which took four weeks to load in, will be taken down in two weeks in mid-April once the festival comes to an end. This will involve reinstating the working platform which was removed after load in so that it didn’t affect the appearance of the piece.

“Working at Unusual I always get asked ‘what is the most ‘unusual’ job you’ve ever worked on’,” said Adam. “I must say, Star in Motion has got to be up there. It was also much harder than the jobs we undertake in ‘normal’ times as we encountered so many changing plans from various governments and countries overnight, visa and flight changes, plus the normal masks and social distancing practices etc.”

Steve concluded: “It’s always good to work on a unique job like this and to know that our client BWS and their end client are happy with everything we supplied – quality products, adaptability and service, all delivered on time with no serious delays, other than the odd high wind day when works were suspended. I am sure, as we approach the first anniversary of AJ’s passing that he would have been extremely proud of this project, of the team that he built and our continued success in delivering high profile projects.” 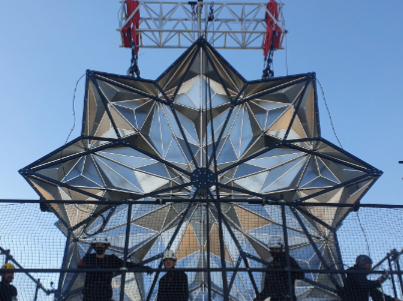 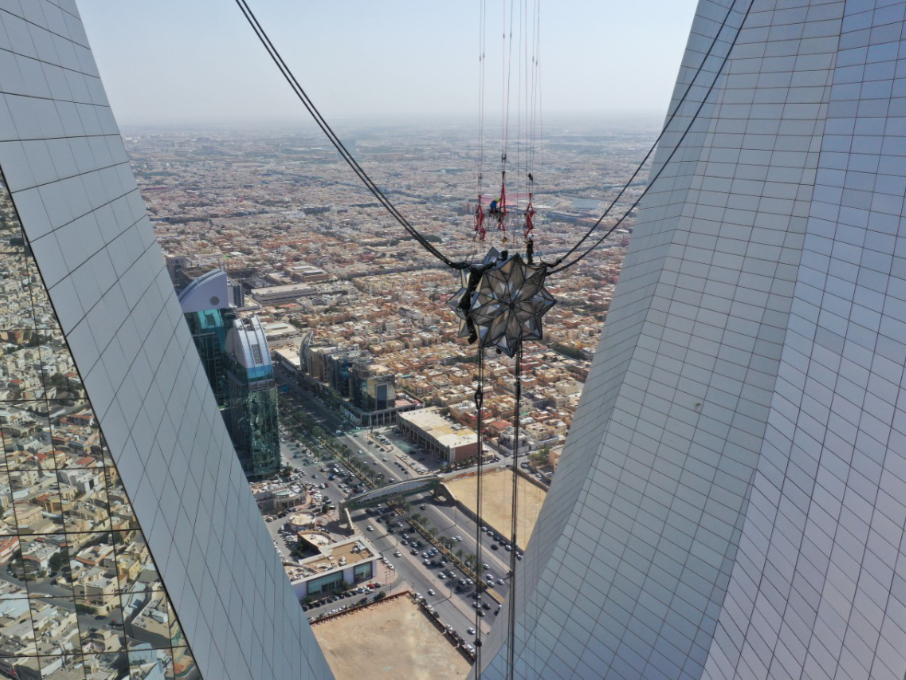