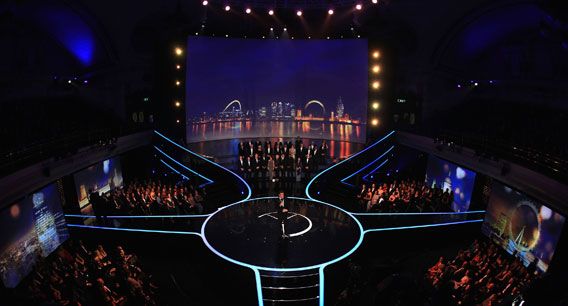 The most prestigious awards in the international sporting calendar, The 2012 Laureus World Sports Awards were held on February 6 at Central Hall Westminster, in the heart of London, the first time the UK has hosted this event.

With an audience of some 1000 international stars from the worlds of sport, entertainment and fashion, plus a global TV audience, these glittering awards demand a glittering setting and once again this was staged by production company Done and Dusted. Helping to build that set was Unusual Rigging, under the watchful eye of Robin Elias.

“There is very little flat floor in the Great Hall, so the stalls area was utilised for the stage, but this meant we had very few hanging points because the area is directly below the dome,” says Elias. “However, we were able to utilise the existing house points to hang a 10m diameter truss above the stage for the lighting and the sound, and put in six or eight ground supported lighting positions on the balconies. The backdrop to the set was a massive 20m x 15m curved front projection screen, for which we designed a strong yet discreet frame which also carried 400kg of lights, scenic masking, etc.”

During the build-up, Elias was asked if Unusual could construct a small, covered stage structure on the roof of Central Hall. He explains: “The venue is opposite Westminster Abbey and adjacent to the Houses of Parliament and Big Ben, so with all eyes focused on London in 2012 the organisers wanted to make the most of the location. We were happy to provide what they wanted, but it wasn’t easy – the only access to the roof was via a narrow staircase!”

Proceeds from the Laureus World Sports Awards directly benefit and underpin the work of the Laureus Sport for Good Foundation which supports almost 80 community projects around the world, which have helped to improve the lives of more than one million young people through the use of sport.

Find out more about the work of Laureus at www.laureus.com 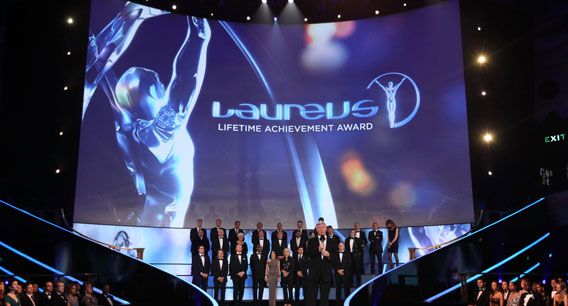