Walking (vertically) in a winter wonderland

When the Bergdorf Goodman department store in New York revealed its legendary holiday windows to hordes of shoppers with a performance by STREB Extreme Action Company, Unusual Rigging was on hand to ensure the event created a much talked about spectacular – and they didn’t disappoint.

Having never before made a big event out of its windows unveiling, Bergdorf Goodman decided to change its demure attitude and approached STREB earlier this year with a request for a show-stopping extravaganza. This year’s theme, Holidays on Ice, features display windows devoted to various annual American celebrations and STREB acrobats opened the show by dancing down the outside walls of the Fifth Avenue store, not unveiling the windows until they reached ground level.

Nate Terracio, STREB’s production manager, said: “We were asked to create a showpiece that would really get everyone talking and we visualised a troupe of dancers making their way down the front of the store climaxing in a grand unveiling. Robin Elias, Unusual’s Technical Director, has been contracted to STREB since London’s pre-Olympic event One Extraordinary Day and we knew he would be able to help us problem solve and create an elegant solution for this project.”

One Extraordinary Day was a series of extreme action acrobatics which began at the Millennium Bridge and culminated with 32 dancers taking the London Eye to new heights as a performance space, pitting their bodies against the extraordinary height and the disorientation of constant rotation. Nate explained: “Since working with Robin last year, we have felt that no one else fully understands what we are trying to do. He now acts as our rigging consultant worldwide and Unusual is our go-to team – regardless of where in the world our projects take us.”

Robin headed over to New York to work alongside Nate and his team. “As rigging consultant, it was my job to supervise the five dancers who would emerge through five windows and descend vertically. We wanted to create the illusion that they were flying out of the building and so getting the height of the belay points right was vital. They needed to be significantly higher than the windows so that the dancers would have enough space to swing from left to right, like a pendulum and also push out from the building and rotate.”

Robin appointed a US rope access company to carry out the work and while it is highly unusual for them to work in the entertainment sector they were happy to work under Robin’s supervision. Each dancer was harnessed in such a way that they could ‘dance’ hands free, while Robin designed a 3 point pick up on their harness which kept them all orientated in the same direction, facing down towards the sidewalk. Robin added: “Safety is paramount and it’s always a challenge to devise a solution that keeps the dancers safe while allowing them to perform confidently without feeling restricted by the harness.”

The dancers were not his only concern however and the building itself threw some interesting challenges into the mix. Robin explained: “The roof of the Bergdorf Goodman building is complicated – delicate and not symmetrical – so we needed to create the five belay points on the face of the store while ensuring the fabric and architecture of this iconic building was not being damaged or compromised.”

As with many jobs of this nature, Nate said time constraints added to the challenges: “We were approached very suddenly for this event with limited advance time. What’s more, there are laws in New York City that ban this kind of activity so we had our work cut out pulling strings in the mayor’s offices while Robin was pulling strings at Bergdorf Goodman.”
Nate concluded: “Working with people who know and understand us is of the utmost importance. Robin was able to take the brief and work it through to fruition and we knew that when he came back to us with a solution there’d be no concerns on our part as to whether he’d got it right or not. As always, he hit the nail right on the head.”

“Since working with Robin last year, we have felt that no one else fully understands what we are trying to do. He now acts as our rigging consultant worldwide and Unusual is our go-to team – regardless of where in the world our projects take us.” 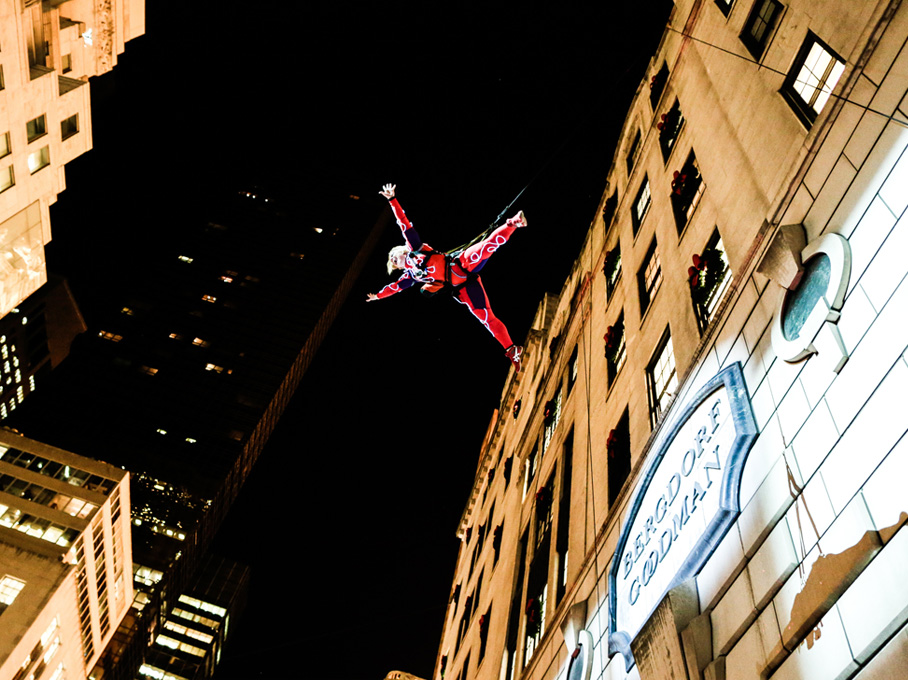 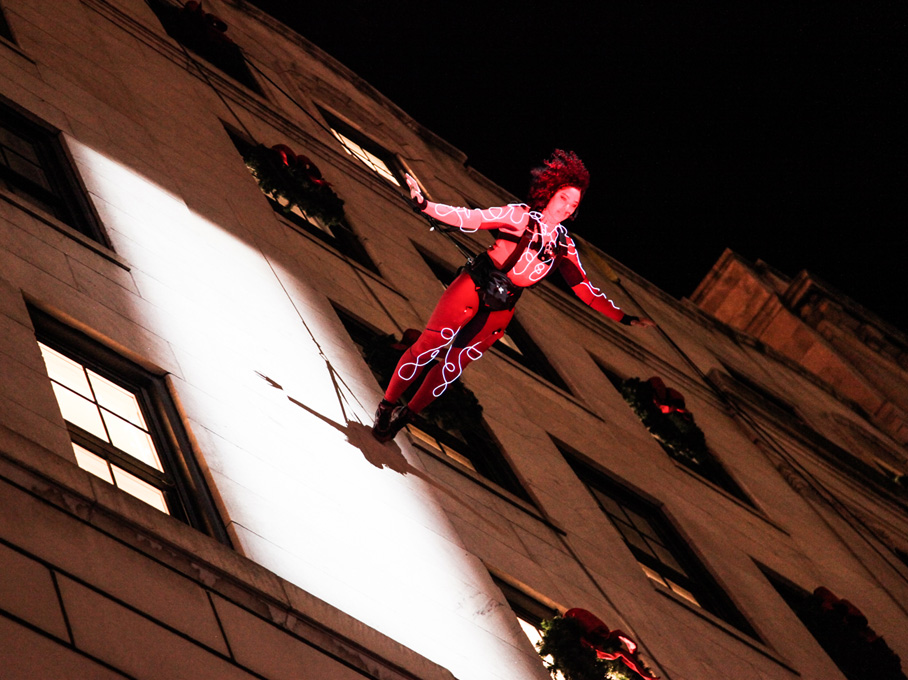