In tune with the architecture at the Royal College of Music

The Royal College of Music is one of the world’s greatest conservatoires, training gifted musicians for international careers as performers, conductors and composers. The RCM’s buildings, facilities and location are the envy of the world, as much for their aesthetic beauty as for their location directly opposite the Royal Albert Hall.

So when new acoustic panels were installed in the iconic building’s Amaryllis Fleming Concert Hall, Unusual Rigging was brought on board by Arup Theatre Consultants to devise a solution for installing them without impinging on the beauty of the hall.

Matthew Nicholl, head of estates at the Royal College of Music, said: “The Amaryllis Fleming Concert Hall is a performance space of the highest international standard which can accommodate large orchestral and choral concerts. It’s an exquisite space with a beautiful barrel shaped roof and our concern was that by installing these new panels, which were essential in order to enhance the clarity of sound for the performers on stage, we would ruin the look of the performance space.”

Mark Priestley, capital projects manager at Unusual Rigging, said: “When we were approached to work on the project, there were plans in place to try and rig more trusses from the ceiling to hang the panels. Not only would this have spoilt the look of the hall but it would, without doubt, have been difficult and disruptive to install, so was definitely not an option. We had to find a different solution with which all parties were satisfied.”

Mark and his team devised a simple yet elegant and discreet solution – just above the stage, visitors may now notice a very subtle addition in the form of a chequerboard of 32 reflective panels which have been added to the lighting bars.

Mark added: “The installation is designed to blend into the fabric of the concert hall without losing the unique acoustics the barrelled ceiling gives to the space. This is after all a venue that has played host to many of the greats, including Richard Strauss and Benjamin Britten, and we were determined that there was no room for compromise either in terms of sound quality or the ambience of the hall as a whole.”

As with so many jobs of this nature, timescales were incredibly tight. Matthew explained. “The Unusual team really had their work cut out since there are just three days a year that the venue is not operational. And hats off to them! The job was completed entirely to plan and to deadline with minimal disruption and normal service was resumed immediately. This is the first time we’ve worked with Unusual Rigging but won’t hesitate to enlist their services again as and when relevant projects crop up.”

Mark concluded: “Regardless of the challenges that they throw at us, it’s always a pleasure to work on intricate and interesting buildings like the Royal College of Music. It’s a learning curve in how to provide a solution which is sympathetic to the venue without compromise, while preserving the unique experience it provides to both the musicians who perform and those who come to listen to them.”

"We won’t hesitate to enlist Unusual's services again as and when relevant projects crop up.” Matthew Nicholl, head of estates, Royal College of Music 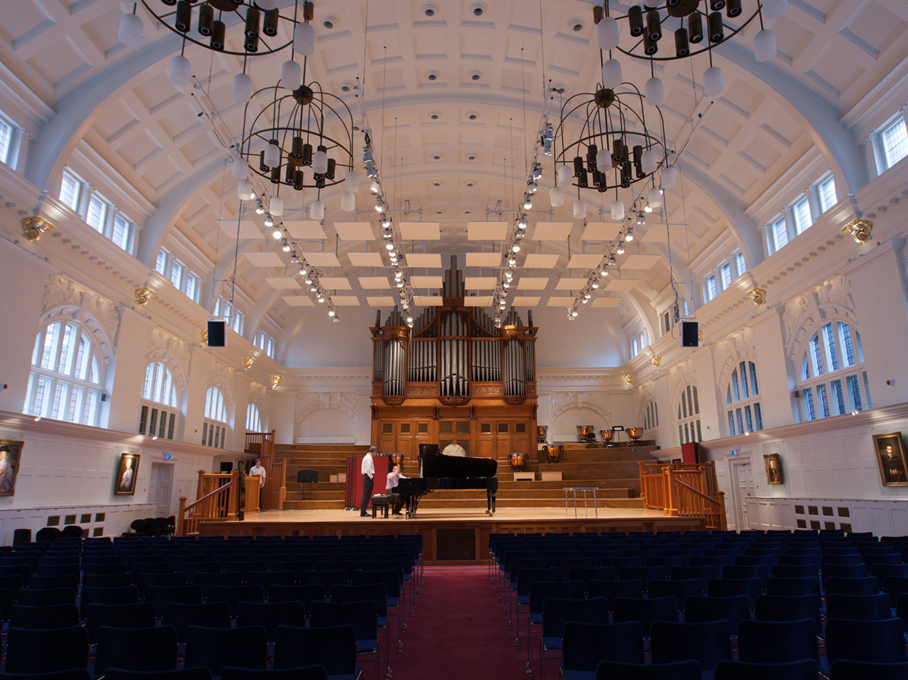