Unusual Rigging puts Ant and Dec in a Spin

Ant and Dec’s award winning Saturday Night Takeaway has returned to TV screens for its 12th series, and what better way to kick off the first episode than with a never before seen stunt for the Ant v Dec challenge.

With a track record for pulling off some amazing stunts in the previous series, ITV Studios brought Unusual Rigging back on board to ensure the latest challenge, watched by more than six million viewers, was even more spectacular.

Unusual’s Robin Elias said: “Having pulled out all the stops in series 11 with the Men on a Ledge and Lift Shaft challenges, the production guys at ITV Studios wanted us to come up with something that appeared even more daring and impressive. ITV Studios came up with the basic concept. Then it was up to the Unusual team to make that idea a reality and so we designed The Turbine.”

Following numerous meetings between the ITV Studios production team and Unusual, Robin designed a structure incorporating six 4m x 3m acrylic transparent climbing walls, put together in the form of a carousel. This would be assembled by a team of riggers, raised to 100ft on a crane and operated on the night by a team from Unusual, like a roundabout. It was then up to Ant and Dec to race around the walls, aiming to change the turbine to their ‘team colour’ by pressing the buzzer on top of each wall.

Described by the show’s commentator Clive Tyldesley as a ‘spectacular sight’ in the London sky, he went on to compare The Turbine to “something out of Star Wars or Gravity – a spinning satellite.”

As with any ‘stunt’ that Unusual works on, nothing is ever straight forward. “We are constantly making changes to the challenge and fine tuning every detail right up until the last minute. It’s my job to supervise the safety management which is always our priority and always guaranteed. The challenge is creating the illusion of danger,” Robin explained.

“If we’re not creating something that is visually breathtaking, then we haven’t done our job properly,” he continued. “The studio audiences and the people watching the show at home need to have their hearts in their mouths.   You have to remember that while we carry out numerous technical rehearsals, Ant and Dec face their challenge for the first time on live TV.”

On their descent to the ground, the Geordie duo looked relieved, with Dec commenting that the challenge wasn’t exactly his cup of tea. “That’s exactly what we want to hear,” concluded Robin. 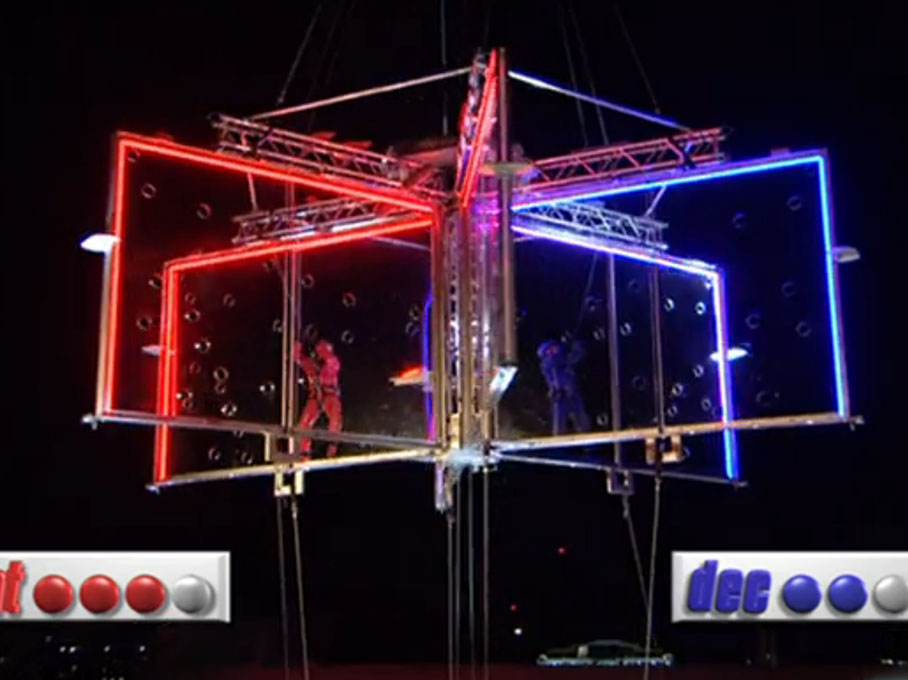