Cosmonauts: Birth of the Space Age

Crowds have flocked to see the Science Museum's Cosmonauts: Birth of the Space Age exhibit since it opened in September to rave reviews. The Daily Telegraph called it Colossal. An Outstanding Collection, said New Scientist magazine. But how did twelve huge Russian spacecraft make their way to the first floor of the Science Museum in central London?

Suzanne Boothby, Cosmonauts Exhibition Delivery Manager said: "We brought Unusual Rigging on board at an early stage as the spacecraft and equipment on display are unique.  We wanted the reassurance that Unusual bring with their understanding of both our objects and the limitations of the museum.” .

Unusual's Robin Elias flew out to Moscow to advise on the safest way to ensure the exhibits made their way to London unscathed. "Remember, these are huge spacecraft that play a massive part in space history. We can't just load them into the back of a lorry and hope for the best. We also had to consider just how we'd get them inside the building once they arrived at the Science Museum," he said.

Unusual Rigging are no strangers to working in the Science Museum, and as such have developed a lifting system designed to get heavy objects onto either the first or second floor, up through the atrium. But based on the information the Unusual team received, they knew that the Lunar Lander in particular was going to be far too large to enter the museum by the traditional route.

Robin explained: "At the time we thought we would have to bring this particular item in through the window from Exhibition Road – a very complicated and costly procedure. But the trip proved invaluable as I realised the spacecraft could be taken apart and, by orienting the strange shaped pieces properly on their pallets, the team could fit them through the restricted access of the museum."

After careful planning, Unusual Rigging advised both the lenders and the Science Museum on how to dismantle the crafts and pack each piece in sections - ensuring they would be just the right size and weight to enter the building. Unusual's rigging systems within the gallery at the Science Museum then enabled a team to rebuild the Lunar Lander once safely inside.

"Even once all the exhibits were safely inside, our challenges continued," added Robin. "We had to hang all the exhibits in a way which brought them to life, but again, because some were too heavy for the floor of the gallery, we had to mount them on plinths and reinforce the steel work in the floor underneath."

He concluded: "We constructed the Lunar Lander using a lifting and tracking system – picking it up and reconstructing it. One item in particular caused us a real headache as it had a smaller base than we had originally anticipated and as such, we had to engage in some on the spot negotiating with the exhibition designer, the Russian courier and the curator to change the orientation of the piece - perhaps not rocket science - but not far off!" 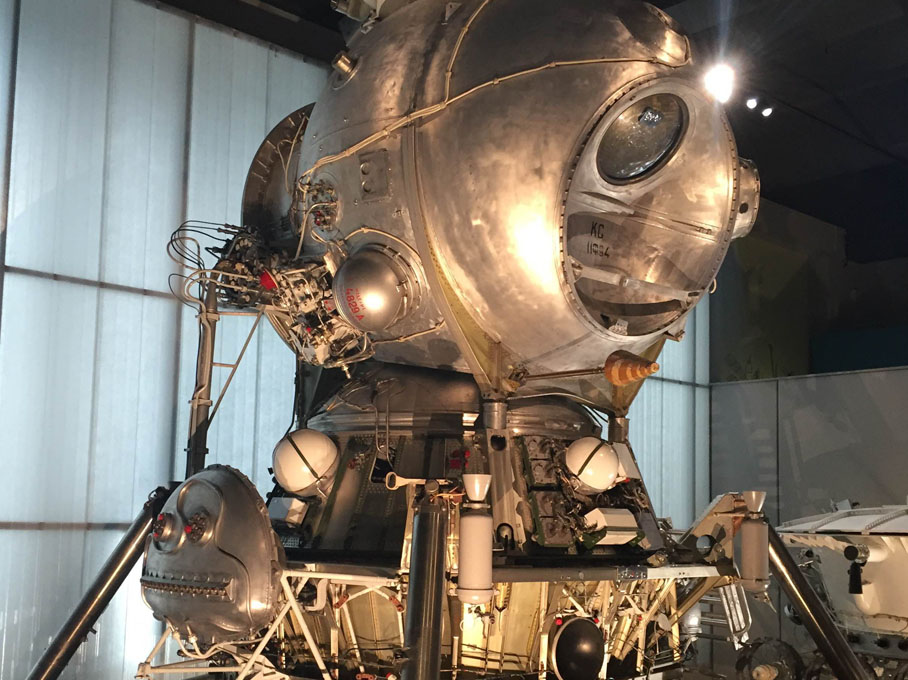